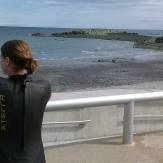 My grandmother solidified my construct of femininity, athleticism, and strength in a single phrase. Luckily, I was a precocious and stubborn child who when confronted with the words “can’t” or “shouldn’t”, I sprinted in the direction of facing a challenge head on. Thankfully, my mother, a product of the 1960’s feminist movement did not take the advice of my grandmother, sought to provide a multi-modal learning experience for both her children.

My younger brother and I took part in a diversity of extracurricular activities, the benefit of middle class upbringing. I explored various sports, arts, and music. I learned very quickly that being the shortest in my family would not be beneficial on the basketball court, and music wasn’t exactly my wheelhouse despite some off-key singing in the shower, but I loved art classes.

From a sport perspective, after testing out several sports, it was clear that soccer was perfect outlet for a “young lady.”

I grew up looking up to legends like Mia Hamm, Evangeline Lilly, Brandi Chastain, Jackie Joyner-Kersee and my cousin who was a trail runner. These women vaulted over the barriers for weekend warriors (those individuals who play sports on the weekend- non-professional athletes) and professional athletes.

A direct beneficiary of Title IX legislation, which passed in 1972, I was able to participate in sports in my home town, never questioning that I had a right to be on that field, playing competitive soccer throughout my childhood into high school.

Title IX legislation has been mired in controversy as to whether it positively impacted women in athletics. However, a “Women in Intercollegiate Sport Study” [i] looked at female participation in sports in 1977 through 2006. During this time, the number of women in high school sports had increased by a factor of nine, while the number of women in college sports had increased by more than 450%.

Title IX opened the door for more inclusion in athletics and access to athletics programs at every level, however, in the era of the “Me Too” social movement, Equal Pay for Equal Work, and the Women’s March, it is increasingly clear that while some have benefitted from the advances of feminism, we still have a long way to go.

As an adult I’ve witnessed the reaffirmation of gender in various ways across my personal experience with athletics. Most recently, marketing campaigns like “strong is the new sexy”, the body dysmorphic #FitSpo, fitness apparel and gear reminding women that mascara and coffee are equally important for fitness, and the increase of eating disorders while being bombarded with diet and fitness marketing.

These campaigns are designed to remind me exactly what my body should look like, how it should function and where and when I can ask it to perform. Unfortunately, these campaigns reduce strong women to their lowest common denominator, their physical bodies, embracing unhealthy behaviors and in some extreme cases, inspiring body shaming.

I recently went to purchase boxing gloves/ mixed martial arts gloves for an upcoming kickboxing class. This was a new sport for me that I couldn’t wait to try out. As a smaller female, I struggled to find boxing gloves that would not only fit my tinier hands but that were what I was looking for in a male dominated sport that would protect me in and outside a kickboxing class or throwing a few punches on a punching bag.

As I scrolled through Amazon and other vendors for boxing gloves, it became apparent to me that the gendered position of pink and pretty was alive and well. I seriously could not find boxing gloves that would fit my hands that were not pink or decorated with something more feminine like butterflies.  I was not happy. I ranted. I raved. I took to Twitter.

This is such a minor issue – really – I mean boxing gloves, but it got me thinking about gender scholar Judith Halberstam [ii] who studied masculinity. Judith concluded that while the defying of gender roles is often tolerated in young girls, adolescent girls who display masculine traits are often repressed or punished.

A simple pair of boxing gloves forced me to evaluate what changed for me personally as a female athlete in childhood and as an adult female athlete and generated several questions:

The problem is not pink gloves. The problem is defining and re-defining the athlete that happens to be a woman as a female athlete. As an athlete, I want to be judged by my physical performance, whether I was able to master a new skill, set a new personal record or triumph over my own obstacles.

While some athletes, both male and female, will prefer, out of personal preference, to like pretty and pink gear, what personally struck a nerve was that a simple piece of equipment could have more intrinsic meaning. These gloves and the fitness machine asks me to validate my femininity with catchy slogans while seemingly reducing the sweat, tears, and triumph of female athletes who fought to get to the start line and cross that finish line after normative culture said they could not compete because their bodies couldn’t handle it.

Will I wear pink gloves? Yes. Will I like it? No. Why? Simply because I want to be on equal footing with the dude next to me. I do not want to differentiate because of my gear choice. I want to stand on the merits of my accomplishments.

An auntie to amazing (soon-to-be two) nieces, I want to set the very best example, demonstrating that you can set goals and crush them regardless of who has stood in your way, regardless of who told you that you cannot or should not do it as an woman, as a athlete, as a feminist.  My nieces can study both  piano and pursue sports, reject or support a gendered binary, and respect, love, and embrace their body for what it can do, be it on a field or in a classroom or in their careers.  And yes, they of course can rock pink boxing gloves if they prefer.

I eventually settled on a black/blue pair of MMA gloves that were child-sized.

When not running, swimming and throwing herself over obstacle course walls, Katy Spencer Johnson supports media relations and social media strategy in higher education. Katy is a Five Favorites Lead Ambassador supporting the Five Favorites podcast, part of the Why I Social family of podcasts.  Katy can be found on Twitter at @katyb_spencer.

← Guest Post: Focus on YOU for maximum productivity in your life
Interview Series: Cathy Wassell →